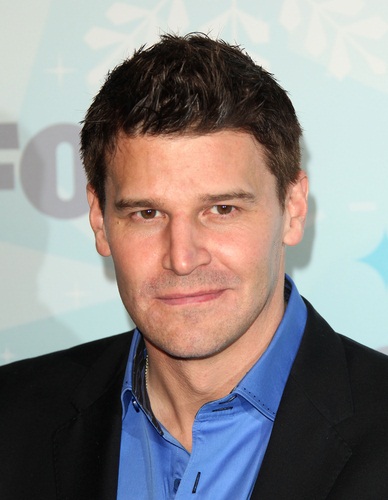 David Boreanaz is an American actor, television producer, and director. He is known for starring as the vampire Angel on the television shows Buffy the Vampire Slayer and Angel.

His father is television broadcaster Dave Roberts, originally David Thomas Boreanaz. David is married to actress and model Jaime Bergman, with whom he has two children.

David’s father is of Italian descent, with roots in Torreano, Province of Udine, Friuli Venezia-Giulia, and Valledolmo in Sicily. The surname Boreanaz, Borjanac or Berginc in Slovenian, originates in the Friuli Venezia-Giulia region, from the place name Borjana, and likely indicates at least distant Slovenian ancestry. David’s maternal grandfather was of Irish, German, French, and Swiss ancestry. David’s maternal grandmother was of Slovak descent.

David’s paternal grandfather was named Henry H. Boreanaz (the son of Giuseppe/Joseph Boreanaz, and of Philiphina/Philipena/Philippina/Filipina Minnie, whose maiden name likely was Panebianco). David’s grandfather Henry was born in New York, to Italian parents. Giuseppe was born in Torreano, the son of Andrea Boreanaz, who was born in Masarolis, and of Marianna Zamparutto/Zamparutti.

David’s maternal grandfather is Kenneth B. Moore (the son of Frank Levi Moore and Agnes Lovey McKinney). Kenneth was born in Pennsylvania. Frank was the son of George B. Moore and Laura J. Kissinger. Agnes was the daughter of Leonard Millard Fillmore McKinney and Catherine Agnes Swam.

David’s maternal grandmother is Christina/Christine Skrha (the daughter of Paul Skrha and Anna Yurcik). Christina was born in New York, to Slovak parents, with roots in Sobotište.

Article on David’s ancestry by Megan Smolenyak Smolenyak, at The Huffington Post – http://www.huffingtonpost.com