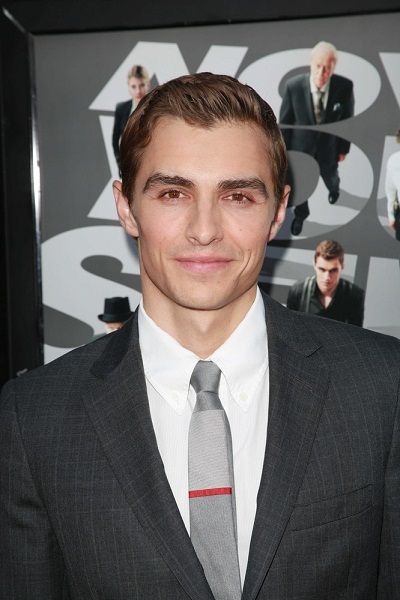 Dave Franco is an American actor and filmmaker. He is known for his roles in Fright Night (2011), 21 Jump Street, Now You See Me, Nerve, and The Disaster Artist, among many other movies, and for directing horror film The Rental.

Dave is the son of Betsy (Verne) and Douglas Eugene Franco. His father ran a Silicon Valley business, and his mother is a writer and actress. His brothers are actor James Franco and actor and artist Tom Franco. Tom founded the Firehouse Art Collective in Berkeley. A picture of Dave’s father can be seen here. A picture of Dave’s mother can be seen here.

Dave is married to actress, writer, and producer Alison Brie.

Dave’s maternal grandfather was Daniel Surad Verovitz/Verne (the son of Carroll Verovitz and Bessie G. Surad). Daniel was born in Ohio. Carroll was born in Chicago, Illinois. Carroll’s father, Harry/Harris David Verovitz, was a Russian Jewish immigrant. Carroll’s mother, Mary Harris, was born in Ohio, to a German Jewish father and a Polish Jewish mother. Bessie was born in Portland, Oregon, the daughter of Philip Surad and Mary Shank, who were Jewish emigrants from Russia.

Dave’s maternal grandmother was Marcella Ruth “Mitzie” Levine (the daughter of Emanuel “Manuel” Levine and Jessie Bialosky). Marcella was born in Ohio, and owned the Verne Art Gallery, a prominent art gallery in Cleveland. Emanuel was a noted judge in Cleveland; he was born in Vilna, Lithuania, to Jewish parents, David J. Levine and Michelle Corban. Jessie was born in Ohio, the daughter of Louis Bialosky and Rebecca Shapiro, who were Polish Jewish immigrants.