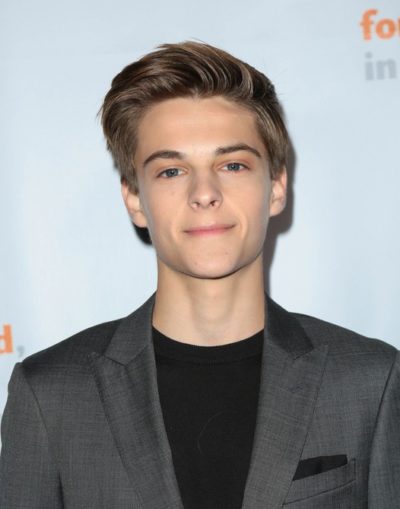 Corey Fogelmanis is an American actor, model, and photographer. He stars on the show Girl Meets World and in the films Ma and Mostly Ghostly: One Night in Doom House.

Corey’s paternal grandfather is Andris/Andy/Andrus Fogelmanis/Fogelman (the son of Daina/Dain Maldonis). Andris was born, c. 1934, in Latvia, and came to the U.S. in 1949 with his mother. Daina was a pianist. She was the daughter of Voldemārs Maldonis, a Lutheran minister.

Corey’s paternal grandmother is Martha Annette/Amelia Fausch/Fousch (the daughter of Roy Ulysses Fausch and Ida Beatrice Olson). Martha was born in Ames, Story, Iowa. Roy was the son of Jacob Byron Fausch, who was Swiss, of Swiss-German descent, and of Amelia Martha Alleman, who was of Swiss-German ancestry, with roots in Bern. Ida was the daughter of Norwegian parents, Martin Laurits/Lauris Olson Mæland and Marta/Martha Nilsdotter Myklebust/Moklebust, from Hordaland.

Corey’s maternal grandmother was Carol Joanne Hocking (the daughter of George Henry/N. Hocking and Marion Olive Johanna Dingle). Carol was born in California. George was the son of Francis H. “Frank” Hocking, who was English, and of Lucy Bertha Smith. Marion was the daughter of Arthur George Dingle, who was English, and of Johanna Marie Kraft/Kratt, whose parents were from Norway.