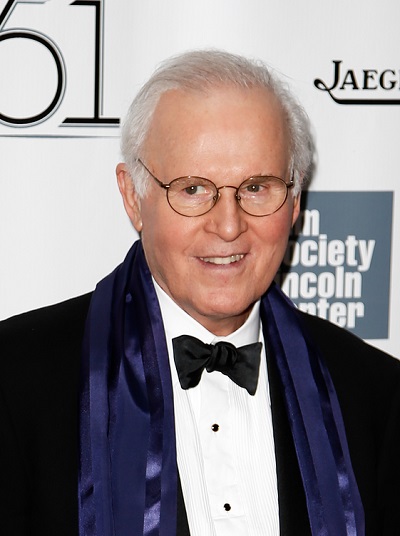 Grodin in 2013, photo by Debby Wong/Bigstock.com

Charles Grodin was an American actor, comedian, writer, and talk show host. He is known for his leading roles in the films Seems Like Old Times, Midnight Run, Beethoven, Beethoven’s 2nd, and Dave, among many others.

Charles was raised Orthodox Jewish. His family were emigrants from the then-Russian Empire, Russia, Poland, and Belarus. His father, Theodore Isadore Grodin, was born in Pennsylvania. His mother, Lena (Singer), was born in Yanov, Tatsinsky, Russia.

Charles was married to writer Elissa Durwood, until his death. Elissa’s father, Stanley Durwood, co-founded AMC Theatres. Elissa is also of Russian Jewish descent. Charles has a daughter, comedian Marion Grodin, with his former wife Julie Ferguson; and a son with Elissa.

Charles’s paternal grandfather was Charles Grodinsky/Grodin (the son of Jacob Grodinsky and Dina Stein). Charles was born in Poland and/or Russia.

Charles’s paternal grandmother was named Rachel Trilluch/Golnick (the daughter of Sidney Golnick and Eunice). Rachel was born in Poland and/or Russia.

Charles’s maternal grandfather was named Nachman/Nathan Singer/Chotz (the son of Moishe/Morris Chotz and Ruth). Nachman was born in Brest, Belarus.