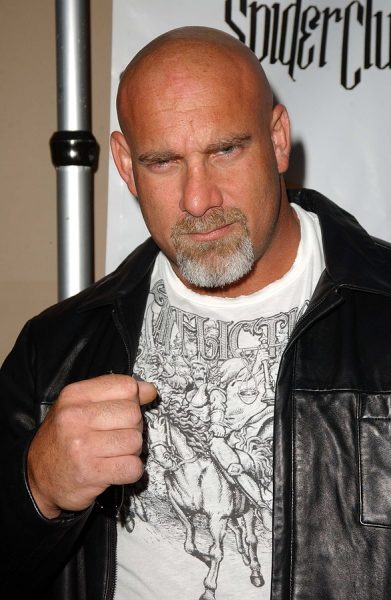 Goldberg in 2006, photo by s_bukley/Bigstock.com

Bill Goldberg is an American professional wrestler, actor, and professional football player. He is known for his work in World Championship Wrestling (WCW) and WWE. He has also been credited as Goldberg and Bill Gold. Bill has appeared on the series The Goldbergs and NCIS: Los Angeles, and in the films Ready to Rumble and The Longest Yard.

Bill is the son of Ethel, a classical violinist, and Jed Goldberg, an OB-GYN. His father was born in Tulsa. His mother was born in Florida. Bill is married to stunt double Wanda Ferraton, with whom he has a son.

Bill’s paternal grandfather was William M. Goldberg (the son of Judel/Yudel/Yidel Goldberg and Bessie/Pessell/Pessel Edith Tannenbaum). William was born in Colorado, to Russian Jewish parents. Judel emigrated from Poland, then in the Russian Empire, and was the son of Moses Eli Goldberg and Fannie/Faga/Feiga Getz. Pessel was the daughter of David Dov Tannenbaum/Tenenbaum and Ester Kruegel, who were born in Seidlce, Poland.

Bill’s paternal grandmother was Ethel B. Leavitt/Levitt (the daughter of Abraham Jacob Leavitt/Levitt and Sophie Pollack). Ethel was born in Minsk, Belarus, then in the Russian Empire, and emigrated with her parents. Abraham was the son of Arye Leavitt. Sophie was the daughter of Zeev Pollack.

Bill’s maternal grandmother was Irene Renee Wolfson (the daughter of Morris D. Wolfson and Sarah Goldberg). Irene was born in Texas. Morris was from Lithuania, then in the Russian Empire, and was the son of Dora.

Genealogy of Bill Goldberg (focusing on his father’s side) – https://www.geni.com