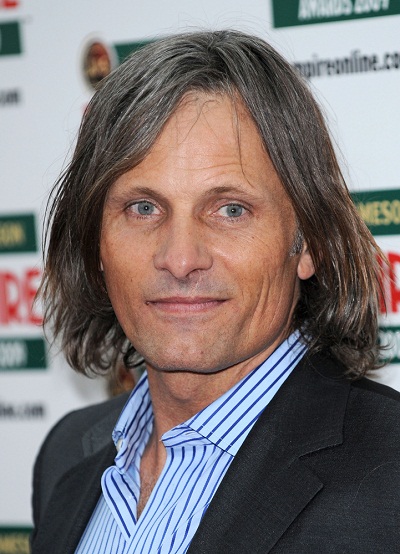 Mortensen in 2009, photo by PrPhotos

Viggo Mortensen is an American actor, author, musician, photographer, poet, and painter. He is known for his roles in A Perfect Murder, A History of Violence, Eastern Promises, Captain Fantastic, Green Book, and Leatherface: The Texas Chainsaw Massacre III, among many other films.

Viggo is the son of Grace Gamble (Atkinson) and Viggo Peter Mortensen. His father was Danish. His mother was American-born, from Watertown, Jefferson, New York, and was of English, and a small amount of Scottish, ancestry. Many branches of her family tree had lived in the United States for many generations.

During his childhood, Viggo spent time in Denmark and Argentina, living in Córdoba, Chaco, and Buenos Aires, before returning to New York. He is fluent in English, Danish, Spanish, and French. Aside from American, he is also a Danish citizen.

Viggo has a son with his former wife, singer, artist, and poet Exene Cervenka.

Viggo’s maternal grandfather was Walter Sidney/Sydney Atkinson (the son of Martin Gay Atkinson and Emma A. Cutten). Walter was born in Parrsboro, Cumberland, Nova Scotia, Canada, and had some American-born ancestors. Martin was the son of John George Atkinson, whose father was English, and of Elizabeth Fawcett, whose father was also English. Some of his ancestors through this line were born in New Brunswick. Emma was the daughter of John R. Cutten and Martha Teed.

Genealogy of Viggo Mortensen (focusing on his mother’s side) – http://www.wikitree.com