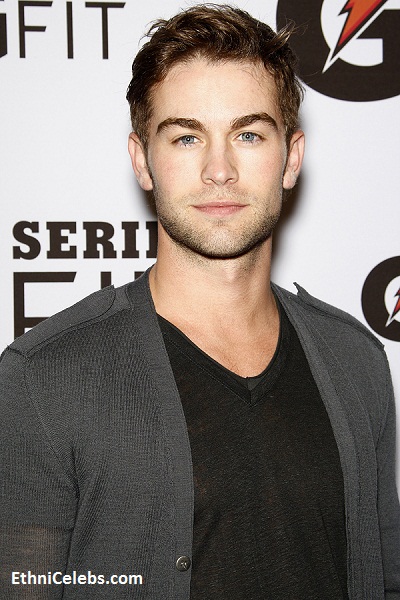 Crawford in 2011, image via Joe Seer/Bigstock.com

Ethnicity: English, along with Scottish, Scots-Irish/Northern Irish, and German

Chace Crawford is an American actor and model.

Chace is the son of Dana and Chris Crawford, a dermatologist. His sister is journalist and Miss Missouri USA 2008 Candice Crawford; Candice is married to football player Tony Romo.

Chace is of mainly English ancestry, along with Scottish, Scots-Irish/Northern Irish, and German. His patrilineal line can be traced back to Andrew Crawford, who was born, c. 1774, in Scotland, and to Andrew’s wife, Mary B. Foster, who was born, c. 1775, reportedly in Abbeville, South Carolina.

Chace’s maternal grandfather was The Rev. Herman Howell Plott (the son of Herman Howell Plott and Frances Eulene Hunter). Chace’s grandfather The Rev. Herman was born in Alabama, and was an ordained minister in the Church of the Nazarene, serving as Senior Adult Pastor at Whaley United Methodist Church. Chace’s great-grandfather Herman was the son of Charles Jackson Plott and Birdie/Byrd Beulah M. Pierce/Slappey/Slappy. Frances was the daughter of Emsley Arthur Hunter and Ursula B. “Sula” Harris.

Sources: Genealogy of Chace’s paternal great-grandfather, William Lawrence Crawford (focusing on his own father’s side) – http://worldconnect.rootsweb.ancestry.com

Genealogy of Chace’s paternal great-grandfather, William Lawrence Crawford (focusing on his own mother’s side) – http://worldconnect.rootsweb.ancestry.com

Genealogies of Chace Crawford (focusing on his mother’s side) – http://familypedia.wikia.com
https://www.wikitree.com

Genealogy of Chace’s maternal grandfather, The Rev. Herman Howell Plott (focusing on his own father’s side) – https://www.geni.com