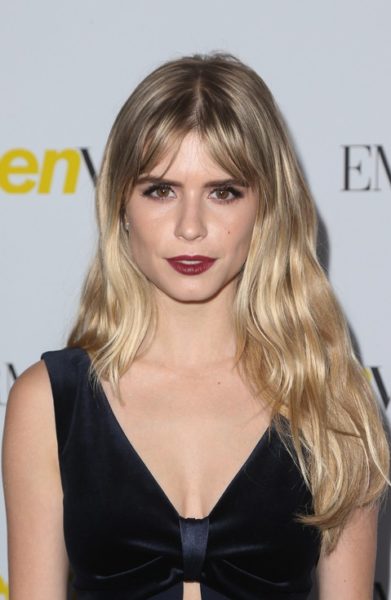 Carlson Young is an American actress.

She is married to Isom Innis, a producer and member of the band Foster the People.

She has stated that she has Irish, French, and Swedish ancestry. She also has English roots, and a Danish great-great-great-grandfather.

Carlson’s paternal grandfather was George Marshall Young (the son of Marshall Roberts Young and Margret E. Kelly). George was born in Texas. Marshall was the son of George Andrew Young, who was born in Canada, to an Irish father and a Canadian mother, and of Helen/Hellen Jane Outzan/Outson/Outzan, whose father was Danish. Margaret was the daughter of William Carroll Kelly, whose parents were Irish, and of Lena Bondurant McAdams.

Carlson’s maternal grandmother is Elizabeth Ann Root (the daughter of Harold F. Root and Elsie E. Carlson). Harold was the son of Nelson Henry Root, who was born in Massachusetts, to a Canadian father, from Montreal, and to an Irish mother, and of Johanna J. McCrohin, whose parents were Irish. Elsie was born in Massachusetts, the daughter of Swedish parents, Carl Gustav Carlson and Elizabeth A. Johnson.