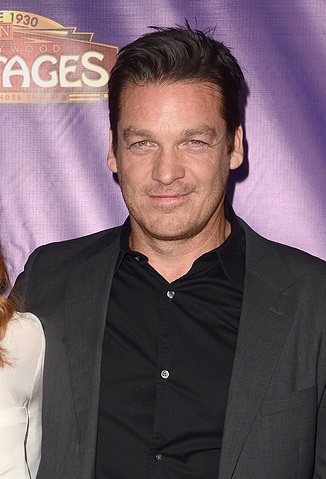 LOS ANGELES – MAY 2: Robyn Lively, Bart Johnson at the “The Bodyguard” Play Opening at the Pantages Theater on May 2, 2017 in Los Angeles, CA, photo by kathclick/bigstock.com

Bart Johnson is an American actor.

His mother, Charlene Johnson, is also an actress. Bart is married to actress Robyn Lively, with whom he has three children. He is a practicing member of the LDS church (Mormon).

Bart’s paternal grandfather was Arthur Francis Johnson (the son of Arthur William Johnson and Mary Elizabeth Crook). Bart’s grandfather Arthur was born in Smoot, Wyoming. Bart’s great-grandfather Arthur was the son of Swedish parents, from Malmöhus County, Charles Andrew Johnson, from Lyngby, and Anna Andersdotter Olson, from Holmby. Mary Elizabeth was the daughter of Samuel Orson Crook, who was the son of English emigrants, from Gloucestershire; and of Mary Winterbottom, an English emigrant, from Lancashire.

Bart’s paternal grandmother was Elgin Wood (the daughter of Daniel Thomas Wood and Susan May Walton). Elgin was born in Auburn, Wyoming. Daniel was the son of Daniel Cotton Wood, who had deep roots in the U.S., and of Elizabeth Waddoups, an English emigrant, from Walsgrave on Sowe, Warwickshire. Susan was the daughter of Samuel Augustine Walton, Jr. and Eliza Catherine Kent, and had deep roots in the U.S.

Bart’s maternal grandfather was Reed Jack Chalk (the son of John Milton Chalk and Fannie Ardell Johnson). Reed was born in Salt Lake City, Utah. John was the son of Elisha Milton Chalk and Celia Ann Elizabeth Price, and had deep roots in the U.S. Fannie was the daughter of Danish emigrants, Peter Johnson, from Randers, and Inger Kristine Steffensen, from Romdrup, Ålborg.

Bart’s maternal grandmother was Vivian Frances Cragin (the daughter of Francis/Frank Edward Cragin and Florence Mar Walters). Vivian was born in Los Angeles, California. Francis was the son of James Henry Cragin and Margaret Dempsey, who were born in the U.S., both of them to Irish parents. Florence was the daughter of Charles John Walters, Sr., who was born on Saint Helier, Jersey, Channel Islands, to English parents, from Devonshire; and of Esther Jane De La Mare, who was born in Tooele, Utah, to a father from Jersey, Channel Islands, and to an English mother, from Sunderland.

Genealogy of Bart Johnson (focusing on his mother’s side) – https://www.geni.com