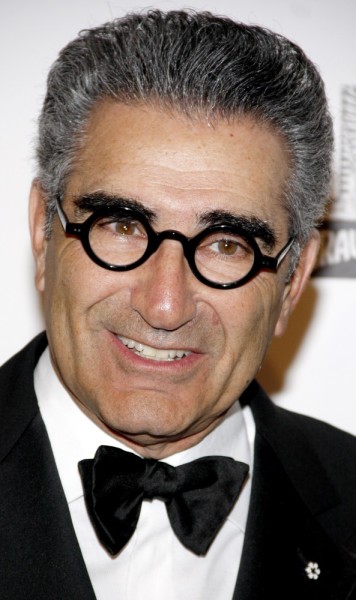 Eugene Levy is a Canadian actor, comedian, producer, director, musician, and writer. He is known for playing Jim’s dad in the American Pie films, among many other roles.

Eugene is the son of Rebecca “Betty” (Kudlats) and Joseph “Joe” Levy, a foreman at an automobile plant.

Eugene’s mother was born in Glasgow, Lanarkshire, Scotland, to Polish Jewish parents. Eugene’s father was born in Hamilton, Wentworth, Ontario, to Jewish parents from Vidin, Bulgaria. Given that the Canadian census lists Eugene’s paternal grandparents as being from Spain, it is likely that they were Sephardi Jews. Much of Bulgaria’s Jewish population is Sephardi.

Eugene is married to producer and screenwriter Deborah Divine, with whom he has two children, actor, writer, producer, and television personality Dan Levy and actress Sarah Levy.

Eugene’s maternal grandmother was Flora Raphael (the daughter of Joseph Raphael and Sarah/Annie/Dora/Rina/Rose Samuels/Levi/Goldberg). Flora was born in Poland. Joseph was born in Posen, the son of Samuel Raphael and Dora.

Genealogy of Eugene Levy (focusing on his mother’s side) – https://www.geni.com