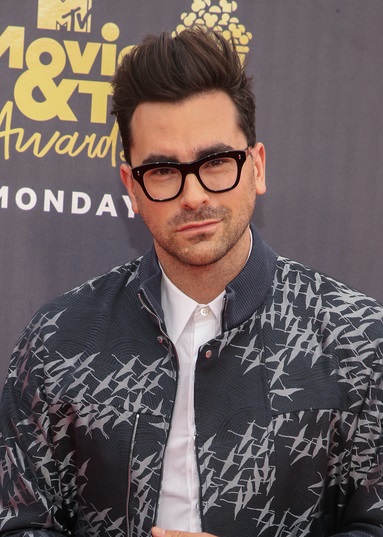 He is the son of producer and screenwriter Deborah Divine and actor, comedian, producer, director, musician, and writer Eugene Levy. His sister is actress Sarah Levy. His great-uncle Harold Kudlats was a music promoter who brought rockabilly music to Canada.

His father is Jewish and his mother is Protestant.

Dan’s paternal grandfather was Joseph “Joe” Levy (the son of Uziel/Israel Levy and Vinucha/Vinncia/Venus Coen). Joseph was born in Hamilton, Wentworth, Ontario, to Jewish parents from Vidin, Bulgaria, who were likely of Sephardi Jewish descent. Uziel was the son of Mary.

Dan’s paternal grandmother was Rebecca “Betty” Kudlats (the daughter of Louis Kudlatz and Flora Raphael). Rebecca was born in Glasgow, Scotland, to Polish Jewish parents. Louis was born in Nasielsk, Powiat Pułtuski, the son of Samuel/Szmul Gdala Kudlacz/Kudlatz and Nycha/Nicha “Nellie” Szmulewicz/Zemanski/Zelmanovitz. Flora was the daughter of Joseph Raphael and Sarah/Annie/Dora/Rina/Rose Samuels/Levi/Goldberg.

Dan’s maternal grandmother was Patricia Tyler (the daughter of Leonard Tyler and Estelle/Estella Barber). Patricia was born in Providence, Rhode Island, U.S. Estelle was the daughter of Walter T. Barber and Maude.

Sources: Interview with Dan’s father at The Jewish Journal – http://www.jewishjournal.com

Interview with Dan’s father at the Canadian Jewish News – http://www.cjnews.com

Genealogy of Dan’s father (focusing on his own mother’s side) – https://www.geni.com