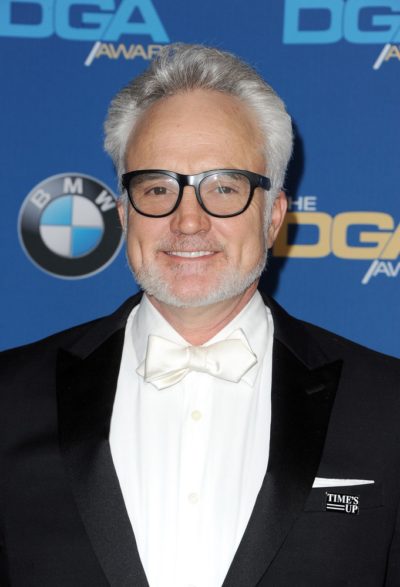 Bradley Whitford is an American actor and liberal political activist.

Bradley is the son of Genevieve Louie (Smith), a poet, and George Van Norman Whitford. Bradley is married to actress Amy Landecker. He has three children with his former wife, actress Jane Kaczmarek.

Many of Bradley’s family lines trace back to New England (Massachusetts, Connecticut, Vermont) of the 1600s. He was raised Quaker.

Bradley’s paternal grandfather was George Sommers/Summers Whitford (the son of Carlos/Charles B./Pedro Whitford and Helen Louise “Ellen” Summers/Sommers/Summer). George was born in Wisconsin. Carlos was the son of Cyrus Beaman Whitford and Laura Adelia Carpenter. Helen was the daughter of Laurel Summers and Mary Parkhurst.

Bradley’s maternal grandmother was Hazel Ruth Neu/New (the daughter of Fredrick/Frederick Louis “Fred” Neu and Ida May Venner). Hazel was born in Nebraska. Fredrick was the son of Johann Georg Friederich/Frederich/Frederick “Fred” Neu, who was from Prussia, Germany, and of Charlotte S. Schwartfuger/Schwertfager, who was of German descent. Ida was the daughter of George W. Venner and Martha Ellen/M. Schuck/Shuch.

Sources: Genealogy of Bradley Whitford (focusing on his father’s side) – https://wc.rootsweb.ancestry.com

Genealogy of Bradley’s mother (focusing on her father’s side) – https://www.ancestry.ca