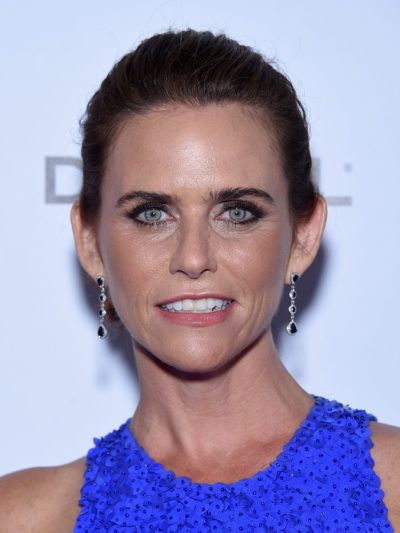 Landecker in 2015, photo by DFree/Bigstock.com

Amy Landecker is an American film, stage, and television actress.

Amy is the daughter of Judith and John Records Landecker. She is married to actor Bradley Whitford.

Amy’s paternal grandfather was Werner Siegmund Landecker (the son of Adolf Landecker and Hertha Kahn). Werner was born in Germany, to German Jewish parents. Adolf was the son of Solomon Landecker and Julie Blumental. Hertha was the daughter of Nathan Kahn and Sophia Spanier.

Amy’s maternal grandfather was Lyndon Welch (the son of Joseph Nye Welch and Judith Lyndon). Joseph was a lawyer and the chief counsel for the U.S. Army, from 1956 to 1960; Joseph was born in Iowa, the son of English parents, William Welch and Martha Thyer. Judith was the daughter of George E. Lyndon and Lilly.

Amy’s maternal grandmother was Angela Dobson (the daughter of Russel/Russell T. Dobson, Jr. and Angela M. Steuer). Russel was the son of Russel/Russell T. Dobson, Sr. and Jennie Wiley. Angela was the daughter of John G. Steuer, who was born in Ohio, to German parents, and of Rose, who was also born in Ohio, to a father from Ireland and a mother from Massachusetts.