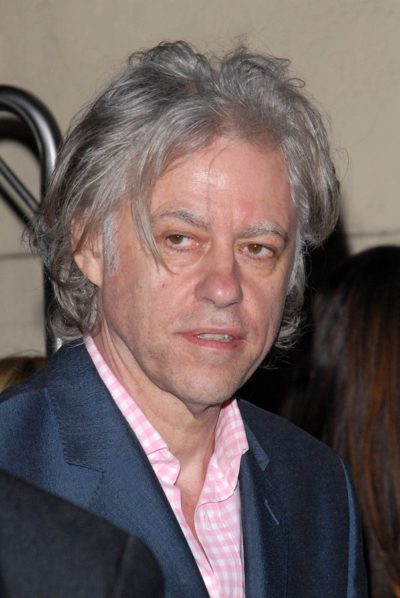 Geldof in 2010, photo by s_bukley/Bigstock.com

Bob Geldof is an Irish singer, songwriter, author, actor, and political activist. He is known as lead singer of rock band The Boomtown Rats.

Bob is the son of Eveline (later spelled as Evelyn) “Eve” (Weller) and Robert “Rob” Geldof. His father was of half Belgian [Flemish and Walloon] and half Ashkenazi Jewish descent. Bob’s mother was Irish, and was from Cork, County Cork.

Bob’s paternal grandfather was Zenon Ulice Geldof (the son of Alphonse Marie Geldof and Zenobie Amelie Vanwonterghem). Zenon was Belgian, from Ypres, West Flanders, Flanders, and had both Flemish and Walloon ancestry. Alphonse was the son of Amandus Ludovicus Geldof and Barbara Rosalia Gillebert. Zenobie was the daughter of Joannes Benedictus van Wonterghem and Pelagie Rosalie Duriez.

Bob’s paternal grandmother was Amelia Falk (the daughter of Morris Falk and Rachael Abrahams). Amelia was born in London, of German Jewish descent.

Bob’s maternal grandfather was Frederick Rodolph Weller (the son of George James Weller and Mary Elizabeth Bebby). Frederick was an English dentist, from Liverpool. George was the son of a German emigrant, Louis Albert Weller, of Braunfels, Hesse, and of Martha. Mary was the daughter of Charles Bebby and Anna.

Bob’s maternal grandmother was Sarah Hartigan (the daughter of Luke Hartigan and Catherine Coll). Sarah was born in Fort, Colmanswell, County Limerick. Luke was the son of Cornelius Hartigan. Catherine was the daughter of Eugene Coll.