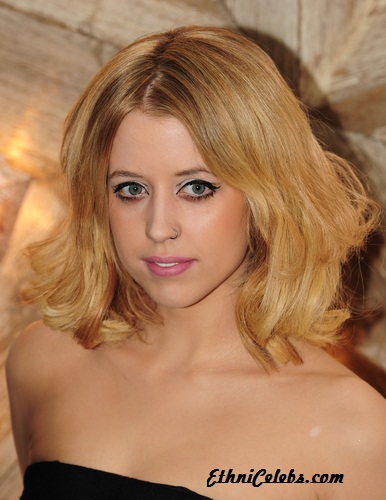 Peaches Geldof was a British columnist, television personality, and model. She was the daughter of singer, songwriter, and activist Bob Geldof and television presenter and author Paula Yates. Her sister is model and singer Pixie Geldof.

Peaches was married to musician Thomas Cohen, until her death. The couple had two children.

Her paternal grandfather was of one half Belgian [Flemish and Walloon] and one half Ashkenazi Jewish descent. Her other ancestry is Irish, English, Scottish, German, and possibly Welsh.

Peaches’ paternal grandfather was Robert “Rob” Geldof (the son of Zenon Ulice Geldof and Amelia Falk). Zenon was Belgian, from Ypres, West Flanders, Flanders, the son of Alphonse Marie Geldof and Zenobie Amelie Vanwonterghem, and had both Flemish and Walloon ancestry. Amelia was born in London, the daughter of Morris Falk and Rachael Abrahams, and was of German Jewish descent.

Peaches’ paternal grandmother was Eveline (later spelled as Evelyn) “Eve” Weller (the daughter of Frederick Rodolph Weller and Sarah Hartigan). Eveline was born in Cork, County Cork, Ireland. Frederick was an English dentist, from Liverpool, and was the son of George James Weller, whose father was German, and of Mary Elizabeth Bebby. Sarah was born in Fort, Colmanswell, County Limerick, Ireland, and was the daughter of Luke Hartigan and Catherine Coll.

Peaches’ biological maternal grandfather was Hughie Green (Hugh Hughes Green, the son of Hugh Aitchison or Charles A. Green, and of Violet Elenore/Ethel M. Price). Hughie was born in Marylebone, London, England, and was a television presenter. Hughie’s father was Scottish. Hughie’s mother was of at least part Irish ancestry. Peaches’ great-great-grandfather was named Daniel Green.

Peaches’ maternal grandmother was named Elaine Smith (the daughter of George Smith and Gertrude). Elaine, an entertainer, was from Blackpool, England.