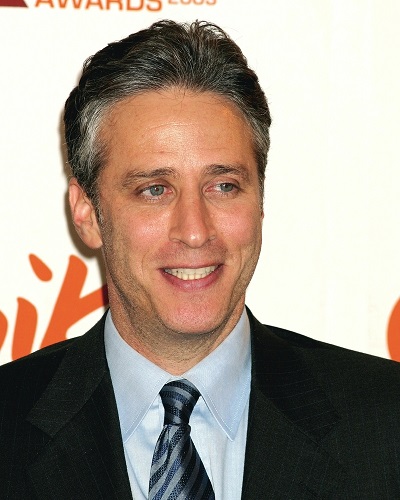 Stewart in 2003, photo by PrPhotos

Jon Stewart is an American comedian, writer, producer, director, satirist, political commentator, actor, and television personality. He was the host of The Daily Show with Jon Stewart from 1999 to 2015.

Jon is the son of Marian and Donald L. Leibowitz, a professor. His parents’ families were both Jewish (from Austria, Poland, Ukraine, and Belarus).

He is married to Tracey McShane, with whom he has two children.

Jon’s paternal grandmother was Rachel “Rae” Rosenfeld (the daughter of Sam Rosenfeld and Sarah Kleinberg). Rachel was born in New York or Austria, of Austrian Jewish background. Sarah was the daughter of Anna.

Jon’s maternal grandmother was Fannie Pitkowsky (the daughter of Max Pitkowsky and Yetta Johanna Pitman). Fannie was born in New Jersey, to a Russian Jewish father and a Polish Jewish mother.