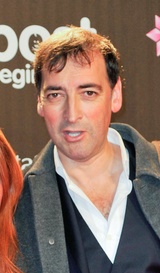 Alistair is the son of Marion (Hancox) and George McGowan. He is married to Charlotte Page.

Alistair’s father was born in Calcutta, India, in 1928, and his caste was recorded as “Anglo-Indian” on his birth certificate. Alistair’s father’s family lived in India for six generations.

Alistair’s paternal grandfather was Cecil Rodney McGowan (the son of Richard Theophilus McGowan and Isabelle/Isabel Caroline Stewart). Richard was the son of Ralph George McGowan, whose mother was an Indian Muslim, and of Ellen. Isabelle was the daughter of John Livingstone Stewart. Alistair’s ancestor married a noble Indian Muslim woman, whose name was omitted from the baptism record because she refused to convert to Christianity, in the mid-1800s.

Genealogy of Alistair McGowan (focusing on his father’s side) – http://www.geni.com