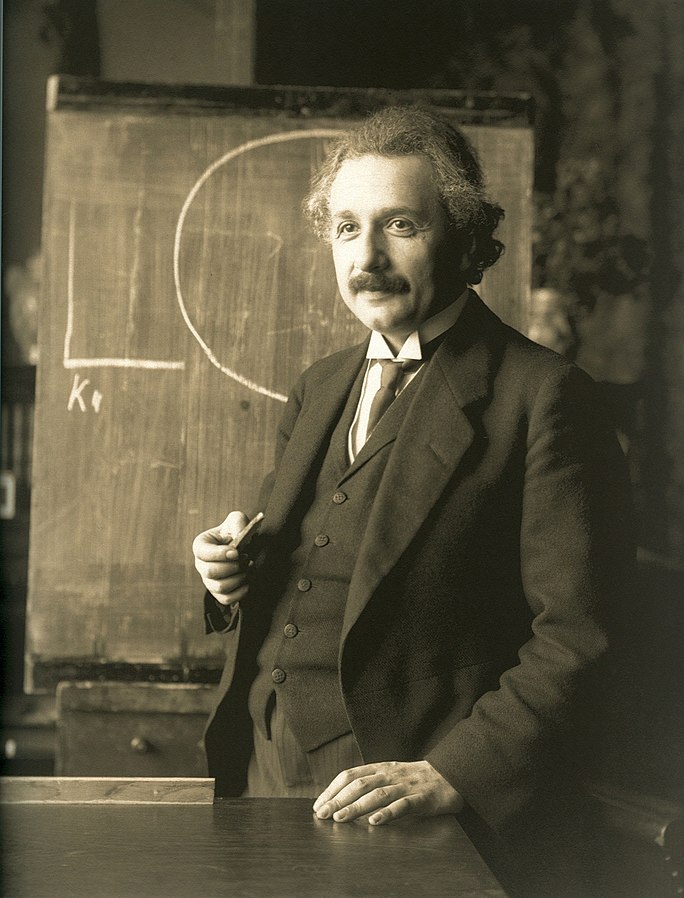 Einstein in 1921, by Ferdinand Schmutzer, at the National Library of Austria, restored by Adam Cuerden

Albert Einstein was a German-born theoretical physicist. He was awarded the Nobel Prize in Physics in 1921.

Albert was Jewish. He was the son of Pauline (Koch) and Hermann Einstein, who was a salesman and engineer. He moved to Switzerland in 1895, then forsaking his German citizenship. Albert decided to stay in the U.S. after 1933, because of the Nazis’ rise to power. He became a U.S. citizen in 1940.

Albert was married to Elsa Einstein, until her death. They were first cousins. Albert had three children with his former wife, Serbian physicist Mileva Marić.

Albert’s paternal grandfather was Abraham Einstein (the son of Rupert Einstein and Rebecca/Rebekka Overnauer/Obernauer). Abraham was born in Buchau, Tübingen, Baden-Württemberg. Albert’s great-grandfather Rupert was the son of Naphtali Hirsch Einstein and Helene Handle Steppach. Rebecca was the daughter of Samuel Obernauer and Judith Mayer Hilb.

Albert’s paternal grandmother was Hendel/Helene Moos (the daughter of Heinrich Hayum Moos and Verena/Veronika Fanny Schmal). Hendel was born in Buchau. Heinrich was the son of Hayum Hermann/Haymann Moos and Lia Heilbronner. Verena was the daughter of Isak Schmal and Johanna Charlotte Bernheim.

Albert’s maternal grandfather was Julius Dörzbacher, later Koch (the son of Zadok Löb Dörzbacher/Doerzbacher and Blumele Sontheimer). Julius was born in Jebenhausen, Goppingen, Baden-Wuerttemberg. Zadok was the son of Loeb Samuel and Golies. Blumele was the daughter of Loeb Moses Sontheimer and Vögele Juda.