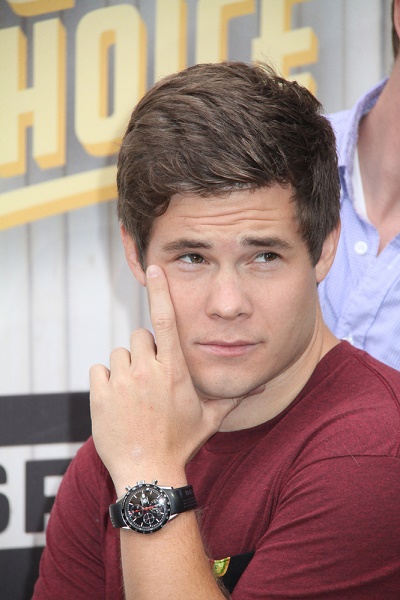 Devine in 2013, photo by Prphotos.com

Adam Devine is an American actor, comedian, screenwriter, producer, and singer. He has starred in the films The Final Girls, Mike and Dave Need Wedding Dates, Isn’t It Romantic, Magic Camp, and Jexi, among others. Adam is married to actress Chloe Bridges.

He is a member of the comedy group Mail Order Comedy, along with Blake Anderson, Anders Holm, and Kyle Newacheck.

Adam’s paternal grandmother was Arvilla V. Drenth (the daughter of Sievert “Sam” Drenth and Elizabeth Grimmius). Arvilla was born in Iowa, to Dutch parents. Sievert was born in Finsterwolde, the son of Berend/Ben Sijwerts/Sieverts Drenth and Jantina/Jennie Alida Bos. Elizabeth was born in Midwolda, Groningen, Netherlands, the daughter of Mentko Grimmius and Jantje “Jennie” Ottens.

Adam’s maternal grandfather was Jack Blain/Blane Cobb (the son of George William Cobb and Ethel M. Tennyson). Jack was born in Missouri. George was the son of John Dorphin Cobb and Mary Susan Hartman. Ethel was the daughter of Geal Albert “G. A.” Tennyson, who was of Dutch origin, and of Emma M. Burgess, who likely had British Isles ancestry.

Adam’s maternal grandmother was Freda Evelyn Smith (the daughter of Russell Everett Smith and Etta Pearl Scott). Freda was born in Missouri. Russell was the son of Henry O. Smith and Lillie J. Leach. Etta was the daughter of John Martin Scott and Elizabeth Ann Brown.

Sources: Genealogies of Adam Devine (focusing on his father’s side) – http://worldconnect.rootsweb.ancestry.com
https://www.geni.com