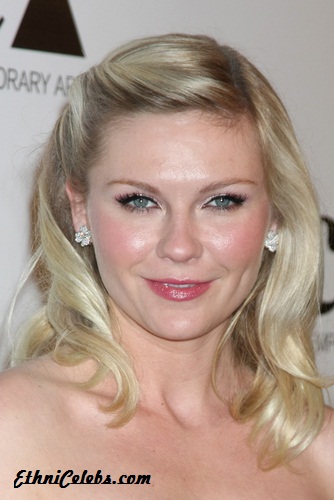 Kirsten Dunst is an American actress, director, model, and singer. She is known for her roles in the films Interview with the Vampire, The Virgin Suicides, Bring It On, Marie Antoinette, and the Spider-Man series, among many others.

Kirsten is the daughter of Inez (Rupprecht) and Klaus Dunst. Her father is German, from Bad Schwartau. Her mother is American-born, from New Jersey. Kirsten’s maternal grandfather was of German descent, while Kirsten’s maternal grandmother was of Swedish ancestry. Kirsten also has German citizenship. Kirsten was raised in Brick Township, New Jersey, and later in Los Angeles.

Kirsten has two children with her fiancé, actor Jesse Plemons.

Kirsten’s paternal grandmother was Ingeborg Alice Maahs/Maass (the daughter of Fritz Maahs and Lilli Wehle). Ingeborg was German. Lilli was the daughter of Hans Wehle and Alice Gregor.

Genealogy of Kirsten’s mother (focusing on her own mother’s side) – http://worldconnect.rootsweb.ancestry.com