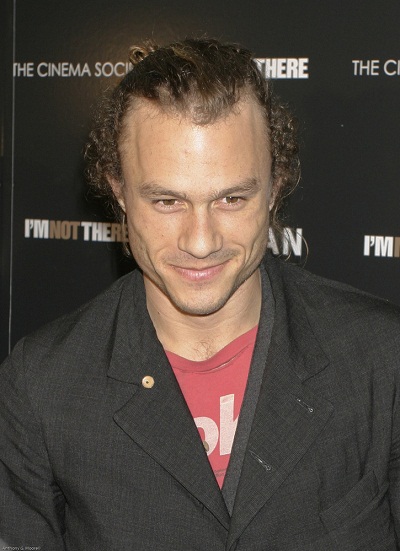 Heath Ledger was an Australian actor and music video director. He won the Academy Award for Best Supporting Actor for The Dark Knight (2008). He also starred in the films 10 Things I Hate About You, Two Hands, The Patriot, A Knight’s Tale, I’m Not There, and Brokeback Mountain, among others.

Heath was the son of Sally (Ramshaw) and Kim Ledger. His father’s family established and owned the Ledger Engineering Foundry. He had a daughter with his former partner, actress Michelle Williams. Heath’s ancestry was English, Irish, Scottish, Welsh, and, from his matrilineal great-great-grandmother, Sephardi Jewish.

Heath was descended from the Solomons, a prominent family of early Jewish settlers in Australia. Through that line, Heath was a distant cousin of Mayor of Adelaide, Judah Moss Solomon, and Premier of South Australia, Vaiben Louis Solomon.

Heath’s paternal grandfather was Colin Francis Ledger (the son of Joseph Francis “Frank” Ledger and Gladys Muriel Lyons). Colin was born in Perth, Western Australia. Sir Frank Ledger Charitable Trust is named after Heath’s great-grandfather. Frank was the son of Edson Ledger, who was born in Kirkstall, Yorkshire, England, and of Annie Frances Sumner, who was born in Lincolnshire, England. Gladys was the daughter of Oliver Charles Lyons, who was of English and Welsh descent, and of Henrietta/Hetta Hatton, whose parents were English.

Heath’s maternal grandmother is Jacqueline “Jackie” Campbell (the daughter of Wallace Ross Campbell and Reta Gwen Jackman). Wallace was the son of James Campbell, who was born in Lanarkshire, Scotland, and of Jessie Mary McKay/Mackay, who was also of Scottish origin. Reta was the daughter of Clement Jackman and Lillian May Solomon.

Heath’s matrilineal great-great-grandmother Lillian was Jewish, of both Ashkenazi and Sephardi background. She was the daughter of Joseph Samuel Solomon and Miriam/Mariam Solomon, who were both from Jewish families from London, England. Joseph’s father, Heath’s four times great-grandfather, was Emanuel Solomon, a businessperson and politician in the early days of the Colony of South Australia.

Heath’s matrilineal line can be traced to Sarah Isaacs/Isaac, who was born, c. 1790, in Amsterdam, the Netherlands. Sarah was a Dutch Jew.

Genealogy of Heath Ledger (focusing on his mother’s side) – http://worldconnect.rootsweb.ancestry.com