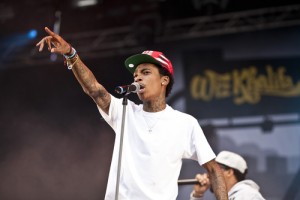 Wiz Khalifa is an American rapper, songwriter, and actor. His stage name, Wiz, is short for “wisdom.” The name Khalifa is an Arabic word, meaning “successor.”

Wiz is the son of Peachie Wimbush and Laurence Thomaz, who were in the U.S. military. Due to their careers, he was raised in Germany, the U.K., and Japan, and then Pittsburgh. He has a son with his former wife, model Amber Rose.