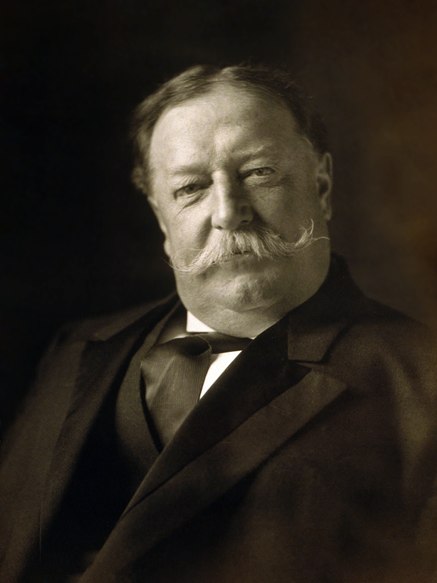 He was the Republican Party’s nominee for re-election President of the United States in 1912.

As far as is known, President Taft was of entirely Colonial American (English) ancestry, with every line of his family having been in the U.S. since the 1600s.

He was married to Helen Louise “Nellie” (Herron) Taft. Their children were Robert A. Taft, a politician and statesman; Helen Taft Manning, a history professor and college dean; and Charles Phelps Taft II, a politician, who was Mayor of Cincinnati, from 1955 to 1957. Robert A. Taft was a candidate for the Republican Party’s nomination for President of the United States in 1940, 1944, 1948, and 1952.

President Taft’s paternal grandfather was Peter Rawson Taft (the son of Aaron Taft and Rhoda Rawson). Peter was born in Uxbridge, Worcester, Massachusetts. Aaron was the son of Peter Taft and Elizabeth Cheney. Rhoda was the daughter of Abner Rawson and Mary Allen.

President Taft’s paternal grandmother was Sylvia Howard (the daughter of Levi Hayward/Howard and Bethia/Berthiah Chapin). Sylvia was born in Townshend, Windham, Vermont. Levi was the son of Benjamin Hayward, Jr. and Mary Wheaton. Bethia was the daughter of John Chapin and Rhoda Albee.

President Taft’s maternal grandfather was Samuel Davenport Torrey (the son of William Torrey and Anna Davenport). Samuel was born in Massachusetts. William was the son of Joseph Torrey and Deborah Holbrook. Anna was the daughter of Seth Davenport and Chloe Daniel/Daniels.

President Taft’s matrilineal line can be traced to Elizabeth Newgate, who was born, c. 1617, to John Newgate and Lydia. Elizabeth was christened at St. Olaves, Southwark, Surrey, England.