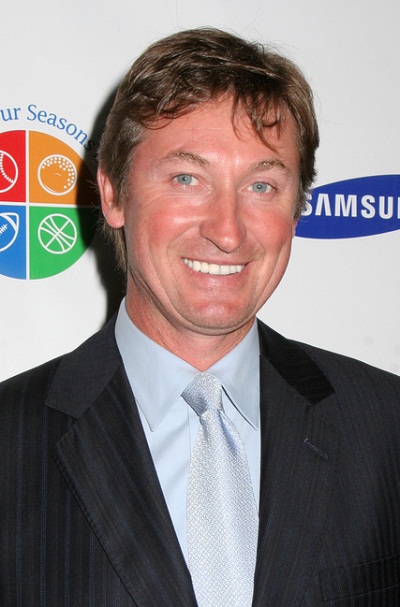 Gretzky in 2007, photo by Prphotos.com

Wayne Gretzky is a Canadian professional ice hockey player and head coach. He is in the NHL Hall of Fame, and is widely considered one of the greatest hockey players ever. He is nicknamed “The Great One.”

Wayne is the son of Phyllis Leone and Walter Gretzky. Among his siblings are professional hockey players Keith Gretzky and Brent Gretzky.

His father was raised on a cucumber farm. Wayne’s father’s family were said to have been landowners in the Russian Empire. It appears that his father was of Belarusian and Ukrainian descent, though he has also been said to have had Polish and/or Russian ancestry (the family evidently spoke Ukrainian).

His mother was of English, and some Cornish and Irish, descent.

Wayne is married to American actress Janet Jones. Among their five children is model and singer Paulina Gretzky and actor Trevor Gretzky.

Wayne’s maternal grandmother was Betty Leone Cook (the daughter of Adam Edward “Ed” Cook and Muriel Leona Biggs/Briggs). Edward was the son of Harry/Henry Cook and Margaret/Mary Currie/Curry. Muriel was the daughter of Frederick/Frederic Biggs/Briggs and Ida/Adeline/Addie May Moore.