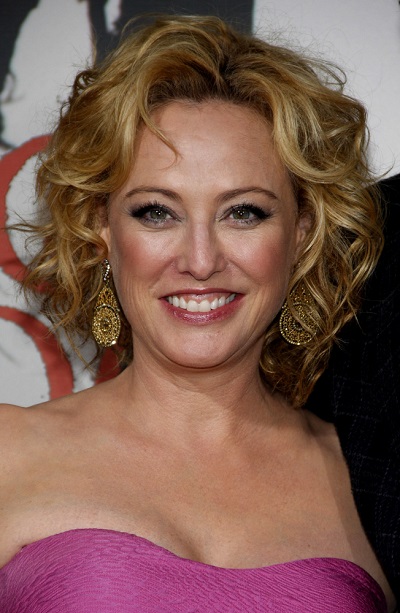 Virginia Madsen is an American actress and film producer. She is known for her roles in the films Candyman, Sideways (for which she received an Oscar nomination), The Astronaut Farmer, and A Prairie Home Companion, among many others.

Virginia is the daughter of Elaine Madsen (born Elaine Loretta Melson), an Academy Award-winning filmmaker, and Cal Madsen, a firefighter. Her brother is actor Michael Madsen and her nephew is actor Christian Madsen. Virginia is married to actor Nick Holmes. She has a son with her former partner, actor Antonio Sabato, Jr.

Virginia’s maternal grandfather was Lance Eugene Melson (the son of Luther Elmore Melson and Dorothy Christine “Dolly” Williams). Lance was born in Oklahoma. Luther was the son of Leandor/Leander Elmore Melson and Mary Ellen Wingfield. Dorothy was the daughter of Henry Wade Williams and Caroline/Calline Lanier.

Virginia’s maternal grandmother was Lavina Loretta Shay (the daughter of Harry Earnest Shay and Cora Lavina Rhodes). Virginia’s grandmother Lavina was born in Colorado. Her step-father was William Riley Jennings. Harry was the son of David Shay and Anna Elizabeth Hendrick. Cora was the daughter of Charles Winfred Rhoades and Clara Bell Courtney.

Genealogy of Virginia Madsen (focusing on her mother’s side) – http://worldconnect.rootsweb.ancestry.com