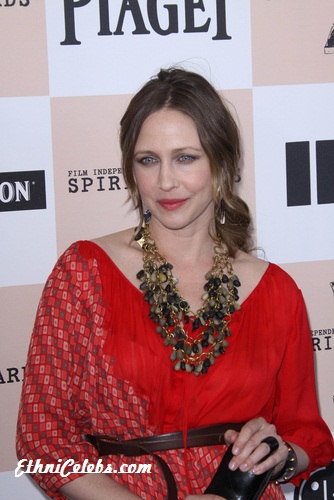 Vera Farmiga is an American actress, director, and producer. Among her many roles are Up in the Air, The Conjuring, Orphan, The Many Saints of Newark, and Higher Ground (2011). She also directed the latter film.

She was born in Clifton, New Jersey, one of seven children of Ukrainian immigrants, Lubomyra (Spas), a schoolteacher, and Michael Farmiga, a computer systems analyst. Her father was raised in Argentina, before moving to the U.S. Vera speaks fluent Ukrainian, her first language. Her sister is actress Taissa Farmiga. Her cousin is artist Adriana Farmiga. Vera is married to musician Renn Hawkey, with whom she has two children.

[My grandparents] went through hell, saw unimaginable things, stuff you shouldn’t have to bear. Then they eked it out for years after the war in displaced-persons camps in Germany until my grandmother got a job with the Americans, and things slowly started coming together for them. But I consider myself to be 100% Ukrainian-American. I went to Ukrainian Catholic school, all my extracurricular activities were within the Ukrainian community, I even became a professional Ukrainian folk dancer.

She is also a classically trained pianist.

She was raised in Irvington and then Whitehouse Station, New Jersey. Her family converted from the Ukrainian Catholic Church to Pentecostalism.

Genealogy of Vera Farmiga (focusing on her mother’s side) – https://www.geni.com