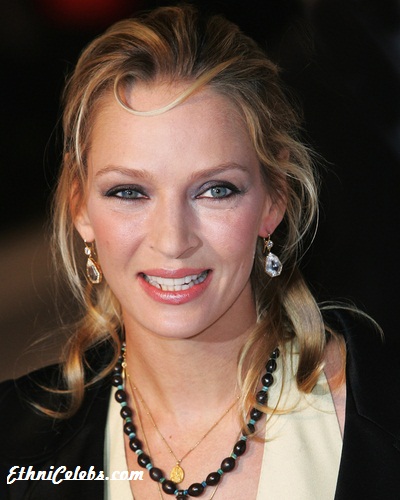 Uma Thurman is an American actress and model. She has starred in the films Pulp Fiction, Batman & Robin, Gattaca, and Kill Bill, among many others.

Uma’s father is an author, academic, and professor of Tibetan Buddhism, at Columbia University, and was ordained as a Tibetan Buddhist monk. He raised his children in a Buddhist environment, and Uma spent time in India and the Indo-Himalayan town of Almora as a child. Her first name, Uma, means, “splendor, light,” and is one of the epithets of Hindu female Goddess Parvati. Her middle name, Karuna, means “compassion” or “empathy.”

Uma’s paternal grandmother was Elizabeth Dean Farrar (the daughter of Preston Cooke Farrar and Edna Violet Patterson). Elizabeth was born in New York, to parents from Pennsylvania. Preston was the son of Samuel Clark Farrar and Marietta Cooke. Edna was the daughter of David Leslie Patterson and Dunie E. Dean.

Uma’s maternal grandmother was Brigit Olga Holmquist (the daughter of Albert Emil Fredrik Holmquist and Julie Tora Krüger/Krueger). Brigit was born in Trelleborg, Sweden. She was the inspiration for the 1930s statue Famntaget (“The Embrace”), by Axel Ebbe, of a nude woman, overlooking the harbor of Smygehuk, Sweden. Albert was Swedish, the son of Johan Edvard Holmquist and Maria Nilsson. Julie was born in Sweden, to a German father, Carl Gustaf/Gustav Adolph Krüger, from Wolfenbüttel, Lower Saxony, and to a Danish mother, Caroline Marie Sörensen, from Copenhagen.

Thurman in 2009, photo by David Shankbone