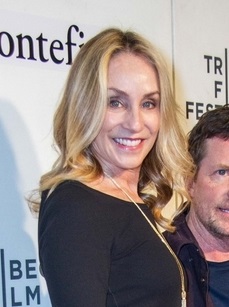 Tracy Pollan is an American actress.

She is the daughter of Corky Pollan, a magazine editor, and Stephen Pollan, a financial consultant and writer. She was raised in Woodbury, New York. Her brother is author, journalist, and activist Michael Pollan.

Tracy is married to Canadian-born actor Michael J. Fox, with whom she has four children.

Her family is Jewish, and her children were raised in the faith.