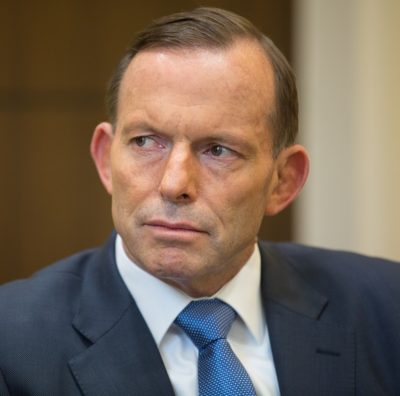 Abbott in 2014, photo by palinchak/Bigstock.com

Prime Minister Abbott is the son of Fay (Peters) and Richard Henry “Dick” Abbott, a maritime engineer. His father is English, from Newcastle upon Tyne. His mother is Australian, from Sidney, and has Dutch and English ancestry. He is married to Margie Abbott, with whom he has three children.

Prime Minister Abbott’s maternal grandmother was Phyllis Irene Lacey (the daughter of Arthur George Lacey and Lucy Fudge). Phyllis was born in Gelligaer, Wales, to parents from Gloucestershire, England. Arthur was the son of Charles Lacey and Mary Ann Hand. Lucy was the daughter of Job Fudge and Louisa Gibbs.

Sources: Genealogy of Tony Abbott (focusing on his mother’s side) – https://www.geni.com