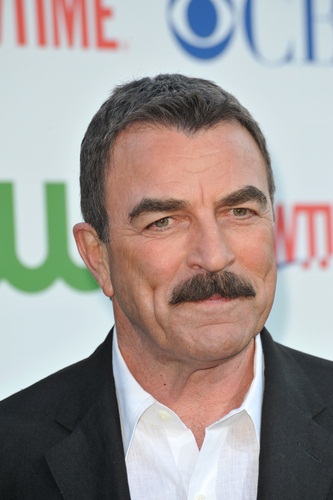 Tom Selleck is an American actor and film producer. He is known for starring on the series Magnum, P.I. and Blue Bloods, and in High Road to China and the Three Men films.

Tom is the son of Martha Jean (Jagger) and Robert Dean Selleck, a real estate developer. His father was of English, one quarter Scottish, one eighth Irish, and more distant German, ancestry. His mother’s ancestry is English. Tom is married to Jillie Mack. He has a son with his former wife, model Jacqueline Ray, and a daughter with Jillie.

There is an internet rumor that Tom’s father was of Slovak/Rusyn descent, possibly because of his perhaps unusual-sounding, English surname, Selleck. This is not accurate.

Tom’s patrilineal line traces to Robert Selleck/Sellock, who was born, c. 1575, in England.

Tom’s paternal grandmother was Nellie Louisa/Louise Fife (the daughter of William Learmonth Fife and Sarah Elizabeth/Eliza Glynn/Glenn). Nellie was born in Chatham, Kent, Ontario, Canada. William was born in Peterborough, Peterborough County, Ontario, and had roots in in Kincardine, Fife and High Comorie, Nielstoun, Renfrewshire, Scotland. He was the son of John William Fife and Elizabeth Pearl Learmonth. Sarah was born in Vernonville, Northumberland County, Ontario, to an Irish father, Joseph/John H. Glynn, and to a mother, Sarah Chambers, with English ancestry.