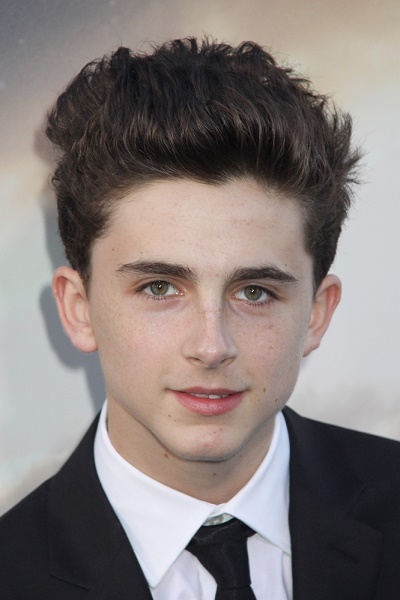 Chalamet in 2014, photo by Prphotos.com

Timothée Chalamet is an American actor. He is the first person born in the 1990s to have been nominated for the Academy Award for Best Actor, for Call Me by Your Name (2017); he played an Italian Jewish character in the film. He is also known for his roles in the films Lady Bird, Hot Summer Nights, Beautiful Boy (2018), Little Women (2019), Dune (2021), and Don’t Look Up, among others.

Timothée is the son of Nicole Flender and Marc Chalamet. Timothée’s father, who is from a Protestant background, was born in Nîmes, France, to a French father and a Canadian mother, who herself was of English, Scottish, and Irish, ancestry. Timothée’s mother, who is American, is Jewish, of Austrian Jewish, Belarusian Jewish, Polish Jewish, and Russian Jewish descent. Timothée was raised celebrating Jewish holidays.

His sister is actress Pauline Chalamet. Timothée’s uncle (his mother’s brother) is director Rodman Flender, and his aunt is television producer and writer Amy Lippman, who is Rodman’s wife.

Preceding Chalamet in that sense, Lucas Hedges and Dev Patel are the first males born in the 1990s to have been nominated for an Academy Award for acting (they in the Supporting Actor category), both in 2016.

Timothée’s paternal grandfather was The Rev. Roger Jacques Chalamet (the son of Charles Chalamet and Marguerite Claire Coulet). The Rev. Roger was a French Protestant minister. He was from Le Chambon-sur-Lignon, a historically Protestant and Huguenot town. It is one of two towns collectively honored as Righteous Among the Nations by Yad Vashem, as the town’s residents helped save Jews during the Holocaust. Roger was living there during WWII. Timothée’s great-grandfather Charles was the son of Dupré Henry Chalamet and Fanny Peyrard. Timothée’s great-grandmother Marguerite was the daughter of Raoul Coulet and Noële Florine Bouillard.

Timothée’s paternal grandmother was Jean Elisabeth/Elizabeth Ashworth (the daughter of Richard Ashworth and Mary Ann Cartwright/Crawley). Jean was born in Canada, of English, and some Scottish and Irish, descent. She was from Brantford, Ontario. She moved to France, where she lived with Timothée’s grandfather. Timothée’s great-grandfather Richard was the son of Abell Allen Ashworth and Ann Broughton/Broughlan. Timothée’s great-grandmother Mary Ann was the daughter of Edmund Cartwright and Jeannette/Jeanette/Janet A. Doyle, whose father was from Ireland or England, and whose mother was from Dumfries-shire, Scotland.

Timothée’s maternal grandfather was Harold Flender, a writer and screenwriter of several films (the son of Jacob “Jack” Flender and Sadie Kasner/Kassner). Harold was born in New York, to Jewish parents from the Austro-Hungarian Empire. Jacob was born in Kraków, Poland, and was the son of Elias Moritz/Mojzesz/Marus Flender and Mariem/Miriam Kempler, who was from Łapanów, Poland. Sadie was the daughter of Hershel/Herschel/Harry Kasner, who had family in Kraków, and of Chana/Annie Frankel, who was from Tarnow.

Timothée’s maternal grandmother was Enid S. Rodman (the daughter of Philip Rodman and Rose Levine). Enid was born in New York, to Jewish parents from the Russian Empire, specifically Minsk. Philip was the son of Max Rodman and Celia Kantrowitz. Rose was the daughter of Yehuda/Julius Melakhovitzki/Levine and Yetta/Etta/Esther Yurzelnski/Abrajonsky.

One of Timothée’s most distant traceable maternal ancestors is Herschl Bisam, who was born c. 1760.

Genealogy of Timothée Chalamet (focusing on his mother’s side) – https://www.geni.com