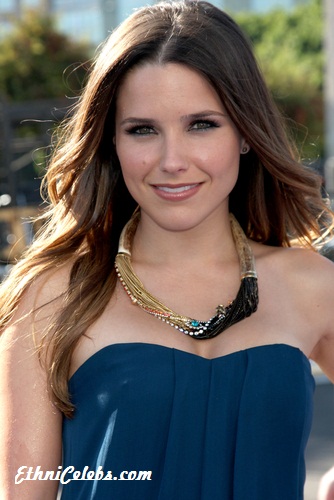 Sophia Bush is an American actress, activist, director, and producer. Her roles include the films The Hitcher (2007) and John Tucker Must Die and the series One Tree Hill, among other projects.

Sophia is the daughter of Maureen, a photography studio manager, and Charles William Bush, an advertising and celebrity photographer. She attended Westridge School for Girls (Pasadena), as well as the University of Southern California. Sophia was a member of the Kappa Kappa Gamma sorority, where she served as Social Chair. She is married to businessperson Grant Hughes.

Her father’s family is from Canada. Sophia’s ancestry is Northern Irish, English, Irish, Scottish, and from her maternal grandmother, Italian. She has stated that she is an Italian at heart, and that she loves Italian food.

Sophia was a second cousin of Christina-Taylor Green, who was killed in the Tucson, Arizona shooting in January 2011.

Sophia’s great-great-uncle, Hudson Allison, died on the Titanic in 1912, along with his wife and daughter.

Sophia’s paternal grandfather was Maxwell Charles Bush (the son of William Charles Bush and Mary Helen Nicholson). Maxwell was born in Toronto, York, Ontario, Canada. William was the son of William Marquis/Markquis/Mark Bush, whose parents were English, and of Mary Ellen Atcheson, whose mother was American. Sophia’s great-grandmother Mary Helen was the daughter of Irish parents, James Hamilton Nicholson, from Belfast, and Annie/Ann Elizabeth McNally.

Sophia’s paternal grandmother was Margaret Jean Allison (the daughter of William Percival/Perceival “Percy” Allison and Estella May Rose). Margaret was from Dundas, Ontario, Canada. William was the son of Jesse Rose Allison, whose parents were from County Antrim, Northern Ireland, and of Phoebe/Pheobe Johnston, whose parents were from Ireland, her father from County Fermanagh and her mother from County Down. Estella was the daughter of Benson Ezekiel Ora/Oray Alsin Rose and Mary Ford.

Sophia’s maternal grandfather was Thomas Peter Searson (the son of James Searson and Loretta/Lorette Sheahey/Sheehy). Thomas was born in New York. James was the son of Irish parents, Thomas Searson, from Dublin, and Margaret “Maggie” Cash.

Genealogy of Sophia Bush (focusing on her father’s side) – https://famouskin.com

Genealogy of Sophia’s paternal grandmother, Margaret Jean (Allison) Bush (focusing on her own father’s side) – https://www.findagrave.com