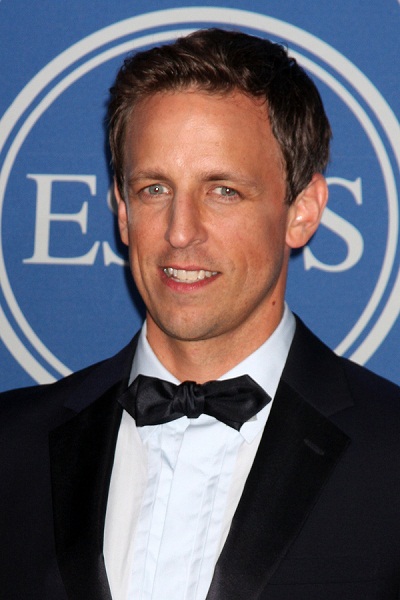 Meyers in 2011, image via kathclick/Bigstock.com

Seth Meyers is an American comedian, writer, producer, actor, and television personality. He has hosted the show Late Night with Seth Meyers since 2014.

Seth is the son of Hilary Claire (Olson) and Laurence Meyers, Jr. His brother is actor and comedian Josh Meyers (Joshua Dylan Meyers). He was raised in Okemos, Michigan, and then Bedford, New Hampshire.

Growing up, my father-whose father was Jewish-embraced borscht and gefilte fish. My brother and I thought it was disgusting. That is not gateway food if you want your kids to embrace Judaism…

Seth’s paternal grandfather was Lawrence Lashe Meyers (the son of Moses Menachem Trakianski, later Morris “Mendel” Meyers, and of Rose/Rosa/Rosie Cohen). Seth’s grandfather Lawrence was born in Pennsylvania, to Jewish emigrants from central and eastern Europe. Moses likely was born in Brazavas, Trakenal Estate, Kalvarija, Marijampoles, Lithuania. He was the son of Mejer/Myer/Maier Trakianski and Gittel/Gertrude “Gusty” Schmidt. Rose was the daughter of Simon Cohen and Fruma. Seth’s great-grandparents were said to have been first cousins.

Seth’s maternal grandfather was named Lawrence/Laurance E. Olson (the son of Edward Olson and Anna). Lawrence was born in Kansas, of Swedish descent.

Seth’s maternal grandmother was Adelaide Jeanette Whetham (the daughter of Frederick/Fred Good Whetham and Anna Marie Gung Leslie). Adelaide was born in Missouri. Frederick was born in England, and was the son of Stephen Whetham and Adelaide Jane Good. Anna had a German father and a Swedish mother.

Sources: Genealogy of Seth Meyers (focusing on his father’s side) – https://www.geni.com