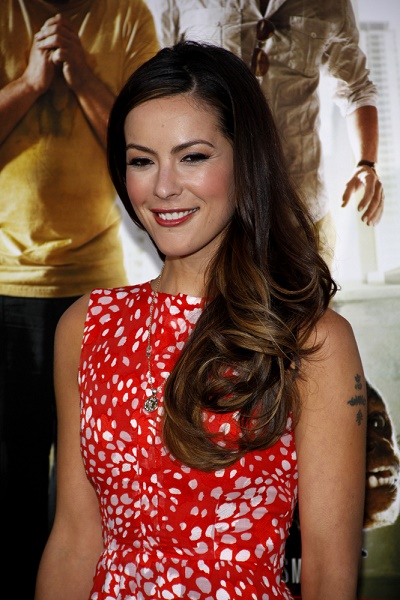 Barrese in 2011, photo by Prphotos

Sasha Barrese, also credited under her birth name of Alexandra Barrese, is an American actress and poker player. She is known for her roles in the sitcom Run of the House and The Hangover films. Sasha was raised by her mother, and grew up with her mother’s surname.

Sasha’s mother is of Russian ancestry, from a family that lived in Harbin and Shanghai, China. On her father’s side, Sasha has English, with some German, Swiss-German, Scottish, Irish, and Welsh, ancestry. Her father’s family is from Oklahoma. She was partly raised in Paris, where her mother was a model.

Sasha’s paternal grandfather was Clifford Dow Mooney (the son of Leon Ridley Mooney and Fannie Clifford Ward). Clifford was born in Oklahoma, and was a decorated war veteran. Sasha wrote about her grandfather’s service here. Leon was the son of Jesse Mooney and Ella Courts Ridley. Fannie was the daughter of John Fredrick Ward and Minnie Leeola Jamison.

Sasha’s maternal grandfather was named Felix Barrese (born Felix Slobodchikoff, the son of Antonina Maychroska/Majchrouska). Felix was born in Shanghai, China, and was of Russian ancestry. Antonina was born in Blagoveshchensk, Russia, and was the daughter of Katherine Maychroska/Majchrouska. Felix took the last name of his stepfather Cosmo S. Barrese. Barrese is an Italian surname.

Sources: Genealogy of Sasha Barrese (focusing on her father’s side) – http://worldconnect.rootsweb.ancestry.com

Genealogy of Sasha’s paternal great-great-grandmother, Ella Courts Ridley (focusing on her own father’s side) – http://worldconnect.rootsweb.ancestry.com