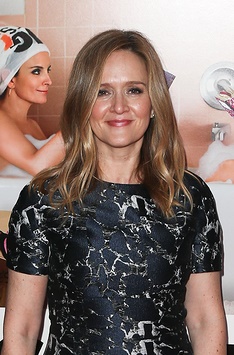 Bee in 2015, photo by Debby Wong/Bigstock.com

Samantha Bee is a Canadian-American comedian, writer, producer, political commentator, actress, and television personality. She has hosted the news comedy show Full Frontal with Samantha Bee on TBS since 2016. She was previously a correspondent on The Daily Show with Jon Stewart.

She is the daughter of Debra and Ronald Bee. Samantha has stated that she has a family heirloom from Ireland that goes back many generations. She is married to actor and comedian Jason Jones, with whom she has three children.

Samantha’s maternal grandfather was Harry Meekins (the son of George Frank Meekins and Edith Bessie Pierre). Harry was English. George was the son of Frank Meekins and Katherine/Kate Charlotte Bunce. Edith was the daughter of Louis Cesar Pierre, whose parents were French, and of Amelia Lavinia Hollingdale.