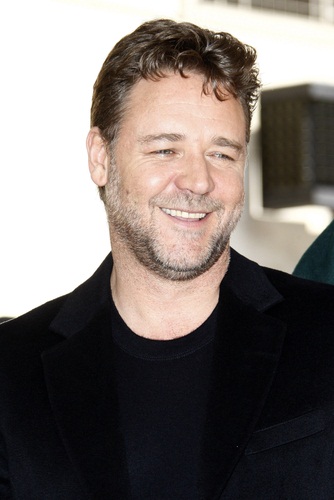 Russell Crowe is an actor, film producer, and musician. He won the Academy Award for Best Actor for Gladiator (2000).

He was born in Wellington, New Zealand, to New Zealand parents, Jocelyn Yvonne (Wemyss) and John Alexander Crowe, who were film set caterers. He was raised in Sydney, Australia from the age of four. Russell’s maternal grandfather, Stan Wemyss, was a prominent cinematographer. Russell has two children with his former wife, actress, singer, and songwriter Danielle Spencer.

His uncle (father’s brother) was cricketer Dave Crowe. He is a cousin of cricketers Martin Crowe and Jeff Crowe, who are Dave’s sons.

Russell’s paternal grandfather was John Doubleday Crowe (the son of William Frederick Crowe and Keziah Marie Davies). John was Welsh, born in Wrexham, Denbighshire, Wales, and later moved to New Zealand. John likely had some English and Irish ancestry, along with Welsh. Russell’s great-grandfather William was the son of Henry Richard Crowe and Sarah Ellen Luggar. Russell’s great-grandmother Keziah was the daughter of Francis Davies and Elizabeth Hannah Doubleday.

Russell’s maternal grandmother was Esmee Jocelyn/Joycelyn Burns (the daughter of John Burns and Rhoda Major). Esmee was born in Wellington, New Zealand. John was the son of a Scottish father, John Burns, and of an English mother, Clara/Clarice Jane Henley. Rhoda was born in Wellington, New Zealand, the daughter of Frederick Major and Annie Ghezzie, whose own father, Luigi Ghezzi, was born in Parma, Emilia-Romagna, Italy, and whose own mother had roots in Limerick, Ireland.

Genealogy of Russell Crowe (focusing on his father’s side) – http://worldconnect.rootsweb.ancestry.com

Genealogy of Russell Crowe (focusing on his mother’s side) – http://worldconnect.rootsweb.ancestry.com