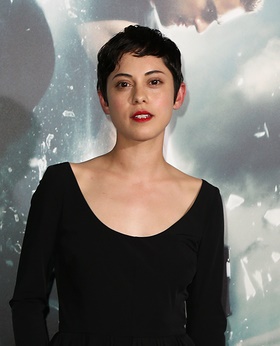 Salazar in 2015, photo by Debby Wong/Bigstock.com

Rosa Salazar is an American actress. She starred in the film Alita: Battle Angel (2019).

She was raised in Hyattsville, Maryland and Washington, D.C. She spent time in foster care.

Rosa has said that her father is Peruvian. She has stated:

Rosa is sometimes said to be of part Cuban descent, although it is not clear if this is accurate.

Rosa’s maternal grandfather was Glenn Jay Adams (the son of Clarence Jay Adams and Mabel Lee Greenlee). Glenn was born in Pennsylvania. Clarence was the son of Marshall Adams and Ida May Williams. Mabel was the daughter of Charles F. Greenlee and Anna/Annie R. Hays.

Rosa’s maternal grandmother was Dorothy Marilynne Schuler (the daughter of Walter Peters Schuler and Lidie Marion Sihler). Dorothy was born in Pennsylvania. Walter was the son of William Schuler and Sarah Elizabeth Peters. Lidie was the daughter of Louis Sihler and Alice E. Buckner.