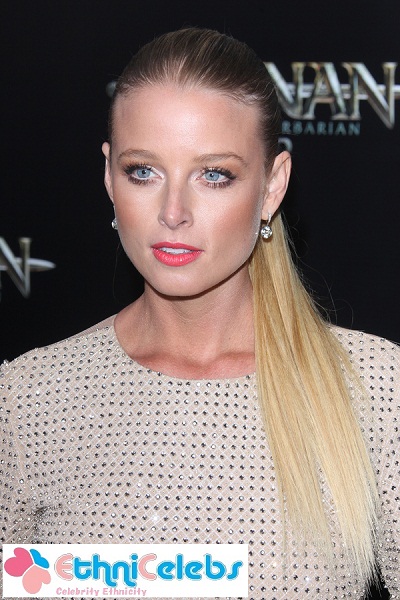 Nichols in 2011, image via kathclick/Bigstock.com

Rachel Nichols is an American actress and model. Her roles include the films The Amityville Horror (2005), Shopgirl, Resurrecting the Champ, P2, Charlie Wilson’s War, G.I. Joe: The Rise of Cobra, and Conan the Barbarian (2011), and the shows Alias and Continuum.

Rachel is married to real estate developer Michael Kershaw. She has also been credited as Rachel Kershaw.

Rachel’s paternal grandfather was Byron Barrett Nichols (the son of General Haverlock Nichols and Lila May Paddock). Byron was born in Maine, to parents from New Brunswick, Canada. Lila was the daughter of Thomas James Paddock and Harriett Mathilda “Hattie” Applebee.

Rachel’s maternal grandfather was Ronald Rossi Bielli (the son of Mario Angelo Bielli and Sophia Elizabeth Rossi). Ronald was born in Vermont. Mario was Italian, born in Caiello, now Gallarate, Province of Varese, Lombardy, the son of Serafino Bielli and Matilda Galli. Sophia was born in Vermont, to an Italian father, Severino Rossi, and to a mother of German descent, Marie Louise Kaufmann.

Genealogy of Rachel’s paternal great-grandmother, Zoraide Pelletier (focusing on her own father’s side) – http://worldconnect.rootsweb.ancestry.com

Information about the Bielli family – https://www.italiangenealogy.com