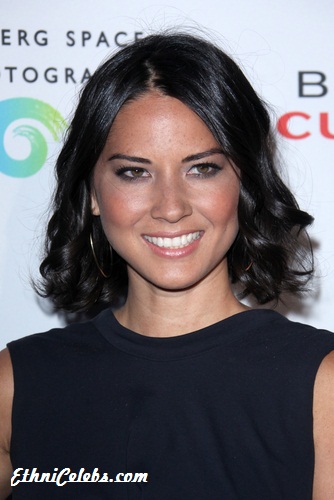 Olivia Munn is an American model, actress, writer, and television personality. Her roles include The Daily Show, The Newsroom, Magic Mike, Office Christmas Party, and The Predator.

Olivia was born in Oklahoma City, Oklahoma, U.S., and was raised in Tokyo, Japan. Her father, who is American-born, is white, and has English, and distant Scottish, German, Scots-Irish/Northern Irish, and French Huguenot, ancestry. Her mother was raised in Vietnam, and is of Chinese descent. Olivia’s mother moved to the U.S. after the Vietnam War. She remarried to an American Air Force man who was stationed in Japan. As a result, Olivia spent a lot of her youth living in Shinjuku, one of the busiest parts of Tokyo. Olivia has said that her mother is a refugee.

Olivia has a son with her partner, stand-up comedian, actor, and writer John Mulaney.

Olivia has modeled in Japan, as well as in the U.S.