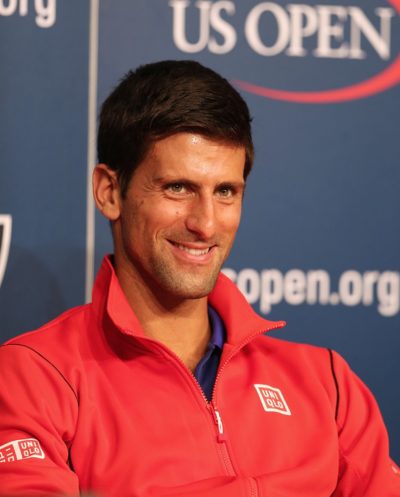 Djokovic in 2013, photo by Leonard Zhukovsky/Bigstock.com

Novak Djokovic is a Serbian tennis player. As of 2020, he is ranked world No. 1 in men’s singles tennis by the Association of Tennis Professionals (ATP).

He is the son of Dijana (Žagar) and Srđan Djokovic. His father, who is of Serbian descent, was born in a village near Trepča, in Kosovo. His mother was born in Belgrade, and is of partly or entirely Croatian descent. His siblings, Marko Djokovic and Djordje Djokovic, are also tennis players. Novak is married to Jelena Ristić, with whom he has two children. His family is Serbian Orthodox.

Novak’s paternal grandfather was Vladimir Đoković (the son of Neđeljko Đoković and Sara Jauković). Vladimir’s parents were from Jasenovo Polje near Nikšić, now in Montenegro, and later moved to Voćnjak in Metohija. The family fled Albanians during WWII, and lived with a relative, named Novak, after whom Novak Djokovic is named.

Novak’s maternal grandparents were named Zdenko and Elizabeta Franjić. They were from Vinkovci in eastern Croatia.

Genealogy of Novak Djokovic (focusing on his father’s side) – http://www.geni.com