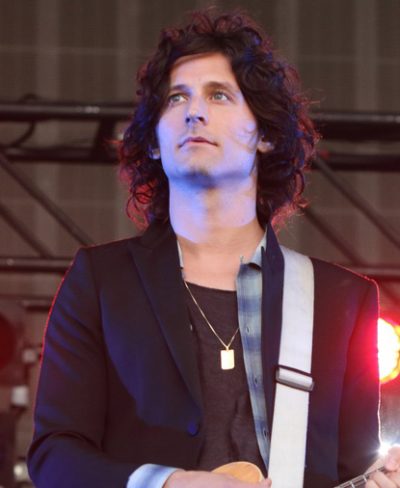 Valensi in 2015, photo by Prphotos

Nick Valensi is an American guitarist, singer, songwriter, and session musician. He is the lead guitarist of the rock band The Strokes. The other members of the band are Julian Casablancas, Nikolai Fraiture, Albert Hammond, Jr., and Fabrizio Moretti.

Nick’s father, who is Jewish, is from Tunisia. His mother, Danielle, has French ancestry. While it is sometimes said that Nick’s mother is also Jewish, this is evidently not the case.

Nick’s maternal grandfather is from Bordeaux, France. Nick spent many summers there growing up.

Nick is married to English photographer and actress Amanda de Cadenet, with whom he has two children. Amanda is the daughter of race car driver and television presenter Alain de Cadenet.