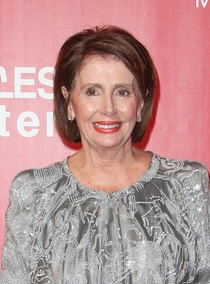 Speaker Pelosi is the daughter of Anunciata/Annunciata/Annunziata M. “Nancy” (Lombardi) and Thomas D’Alesandro, Jr. (Thomas Ludwig John D’Alesandro, Jr.), a politician. Her father, a Democrat, served as a Member of the U.S. House of Representatives from Maryland, from January 3, 1939 to May 16, 1947, and as Mayor of Baltimore, from May 16, 1947 to May 16, 1959. Her father was of Italian descent. Her mother was an Italian emigrant, from Fornelli, Isernia, Molise, who came to the U.S. in 1912; her own grandparents had immigrated first. Nancy’s brother, Thomas D’Alesandro III, was a lawyer and politician, who also served as Mayor of Baltimore, from January 1, 1967 to January 1, 1971.

A DNA test whose results were displayed on the show Finding Your Roots with Henry Louis Gates, Jr. (2021) stated that Nancy’s genetic ancestry consists of:

Genetically, she was found to have a common ancestor with actor Christopher Meloni.

Speaker Pelosi’s maternal grandfather was Nicola Lombardi (the son of Giovanni Lombardi and Antonia/Antonetta/Antoinette Petrarca). Nicola was born in Fornelli, Isernia, Molise, Italy, and became a successful macaroni manufacturer in Baltimore. Giovanni was the son of Nicola Antonio Donato Lombardi and Maria Amalia Lancellotta. Antonia was the daughter of Michele Raffaele Petrarca and Mariantonia Gugliemi.

Speaker Pelosi’s maternal grandmother was Concetta/Concettina Milio/Millio (the daughter of Luigi “Louis” Milio and Gaetana D’Antoni). Concetta likely was born in Patti, Messina. Luigi was the son of Placido Milio and Concetta De Luca. Gaetana was the daughter of Santo.

Sources: Genealogy of Nancy Pelosi (through her brother) – https://www.wikitree.com

Genealogies of Nancy Pelosi (focusing on her father’s side) – http://www.wargs.com
https://www.geni.com
http://wc.rootsweb.ancestry.com