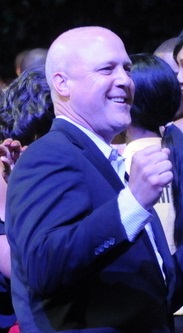 Landrieu in 2012, photo by Prphotos

Ethnicity: German, about one eighth French, one eighth Italian-Maltese, small amounts of Irish, English, and African-American

Mitch Landrieu is an American politician and lawyer. A member of the Democratic Party, he has been Lieutenant Governor of Louisiana, from January 11, 2004 to May 3, 2010, Mayor of New Orleans, from May 3, 2010 to May 7, 2018, President of the United States Conference of Mayors, from 2017 to 2018, and Senior Advisor to the President for Infrastructure Coordination, since November 15, 2021, among other duties.

Mitch is married to attorney Cheryl Quirk, with whom he has five children.

Mitch’s paternal grandfather was Joseph Geoffrey Landrieu (the son of Victor Firmin Landrieu and Cyrintha/Cerentha/Cyrantha Cleno Mackey). Joseph was born in Mississippi. Victor was born in France, and was the son of Geofroy/Geoffroy Stanislaus/Stanislas Landrieu, from Abbeville, and of Melanie Claude Eugénie/Eugenia LeMoine. Cyrintha was the daughter of William Clarence Mackey, and appears to have been of mixed-race background, European and African.

Mitch’s maternal grandmother was Olga Helen/Ellen Macheca (the daughter of Michael/Michel Macheca and Laverna Alberta C. Hartmann/Hartman). Olga was born in Louisiana. Michael was of Italian-Maltese descent. He was the son of Joseph Mercieca/Macheca and Marietta Carvanna. Mitch’s ancestry has been referred to as Sicilian Italian. Mitch’s great-grandmother Laverna was the daughter of Philip Heinrich/Henry Hartmann, who was German, and of Mary Louisa Burrus, who was of German/French Alsatian descent.

Genealogy of Mitch Landrieu (through his sister, Mary Landrieu) – http://www.wargs.com