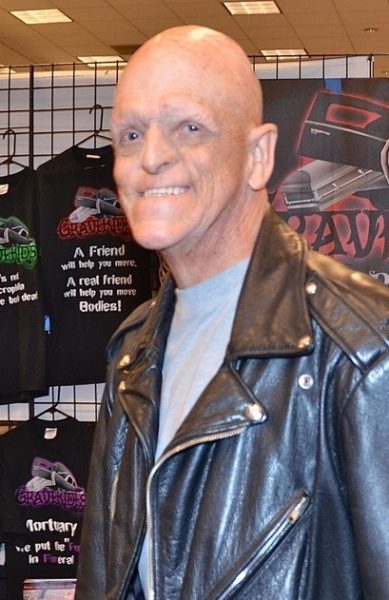 Berryman in 2013, photo by Prphotos

Michael Berryman is an American actor. He is known for his role as Pluto in The Hills Have Eyes films, and for many other genre parts, including The Devil’s Rejects and Weird Science.

Michael is the son of Barbara and Sloan Berryman, a prominent neurosurgeon. His father had English, Cornish, Scots-Irish/Northern Irish, and German ancestry. His mother was of one half Swedish, one quarter German, and one quarter Bohemian Czech, ancestry. Michael is married to Patricia.

He was born with hypohidrotic ectodermal dysplasia, as a result of which he has no sweat glands, hair, or fingernails.

Michael’s paternal grandmother was Helen Schuster Sloan (the daughter of James B./R. Sloan and Helen E. Schuster/Shuster). Michael’s grandmother Helen was born in Iowa. James was the son of John Sloan, who was from Co. Down, Northern Ireland, and of Nancy Neely. Michael’s great-grandmother Helen was the daughter of Georg/George Heinrich/Henry Schuster, who was born in Bavaria, and of Adeline/Adaline Henriette Maritz/Moritz/Meritz, who was an ethnic German, born in France.

Michael’s maternal grandmother was Sophia Mary Von Goerres/Gorres (the daughter of Hubert/Herbert Von Gorres and Barbara Slama). Sophia was born in North Dakota, to a German father and a Bohemian Czech mother.

Another genealogy of Michael’s father (focusing on his own mother’s side) – http://worldconnect.rootsweb.ancestry.com