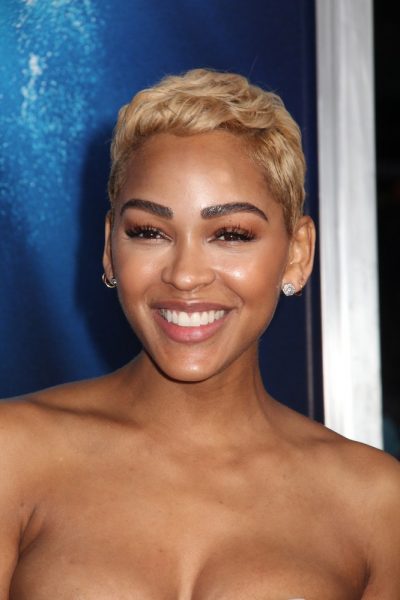 Meagan Good is an American actress. She has starred in the films You Got Served, Stomp the Yard, and Saw V, among many others.

Meagan is the daughter of Tyra Wardlow-Doyle, who managed her career, and Leondis “Leon” Good, an LAPD officer. She has stated:

My mother’s mother is Jewish and African, so I guess that would be considered Creole. My mother’s father was Cherokee Indian and something else. My dad’s mother’s Puerto Rican and black, and his father was from Barbados.

It is not clear if Meagan’s Jewish, Creole, Cherokee Native American, Puerto Rican, or Barbadian ancestry has been verified/documented.

Meagan is a Christian.

Meagan’s paternal grandfather was Leondis Gassaway Good (the son of Gassaway/Gasaway/Gasway L. Good and Captola/Capitola Woods). Meagan’s grandfather Leondis was born in North Carolina, and was African-American. Meaghan’s great-grandfather Gassaway was the son of Theopholus/Theopolus/Theopful Good and Viola. Captola was the daughter of James Woods and Martha Elizabeth “Mattie” West/Foote.

Meagan’s paternal grandmother likely was Helen Gertrude Taylor (the daughter of LeRoy Taylor and Beatrice Radcliffe/Radcliff). Helen was born in Pennsylvania, and was African-American. LeRoy was the son of Lee R. Taylor and Phillis Gwathney/Gwathmey. Beatrice was the daughter of Thomas Grant Radcliff/Ratcliff and Gertrude Foskey.

Meagan’s maternal grandfather was Emmett Arnett Wardlow II (the son of Emmett Arnett Wardlow and Nellie Burnett/Bernett). Meagan’s grandfather Emmett was born in Mississippi, and is listed as “Negro” (black) on the 1930 U.S. census. His parents are also listed as “Negro” on the 1930 U.S. Census, and were born in Arkansas. Meagan’s great-grandfather Emmett was the son of Dan Wardlow and Marsull Brown.

Meagan’s maternal grandmother was Dolores Delrio Armstrong (the daughter of David L. “Dave” Armstrong and Vivian M. Haynes). Dolores was born in Arkansas, as was her father, whose own parents were from Alabama. Vivian’s mother’s maiden name was Duncan.