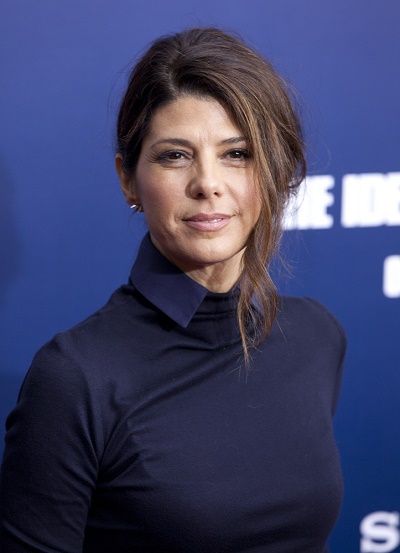 Marisa Tomei is an American actress and producer. She won the Academy Award for Best Supporting Actress for My Cousin Vinny (1992). Her roles also include Chaplin, Untamed Heart, Only You, The Perez Family, In the Bedroom, Anger Management, Before the Devil Knows You’re Dead, The Wrestler, Crazy, Stupid, Love., and post-2015 Spider-Man sequels, among many other films.

Marisa is the daughter of Addie, an English teacher, and Gary Tomei, a trial lawyer. Her brother, Adam Tomei, is also an actor. Her parents are both of Italian descent. Her family is from Tuscany, Calabria, Campania, and Sicily. Marisa has Italian citizenship.

A DNA test whose results were displayed on the show Finding Your Roots with Henry Louis Gates, Jr. (2019) stated that Marisa’s genetic ancestry is:

Marisa’s paternal grandmother was Rita Albina Elvira Calvosa (the daughter of Demetrio Carlo/Charles “Albert” Calvosa and Maria/Mary Preziozi/Preziosi/Prezioso). Rita was born in New York, to Italian parents. Demetrio was born in San Demetrio, Calabria, and was the son of Raffaele Placido “Raphael” Calvosa and Serafina Aurora Corrado, whose own father, Don Carlo Maria Corrado, was a royal chancellor, in the government of Ferdinand II of the Two Sicilies. Maria was born in Napoli, Campania, and was the daughter of Sabino Preziosi/Prezioso and Filomena/Philomina Biondo/Biondi.

Marisa’s maternal grandmother was named Maria/Mary D’Ignoti (the daughter of Giacomo “James” D’Ignoti). Maria was born in New York, to Sicilian parents, from Messina. Giacomo was the son of Antonino D’Ignoti and Buta Francesca. D’Ignoti, meaning “of the unknown,” was often the surname given to foundling children.