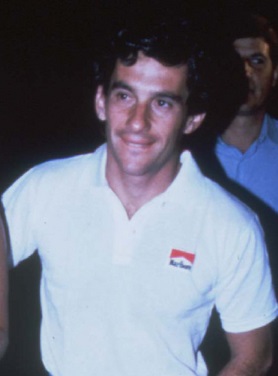 Ayrton Senna was a Brazilian racing driver. A three time Formula One world championship winner, in 1988, 1990, and 1991, he is regarded as one of the greatest drivers of all time. He died in an accident while leading the 1994 San Marino Grand Prix.

Ayrton was born into a wealthy family, the son of Neide Joanna Senna and Milton Guirado Theodoro da Silva. He was a devout Catholic.

His father was of half Brazilian/Portuguese and half Spanish descent. His mother was of Italian [Campanian, Tuscan, Sicilian] ancestry.