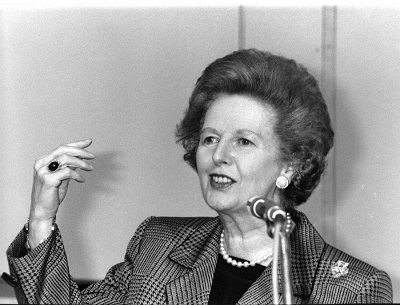 Prime Minister Thatcher was the daughter of Beatrice Ethel (Stephenson), from Lincolnshire, and Alfred Roberts, from Northamptonshire. Her father owned a tobacconist’s and a grocery shop, and was an alderman and Methodist local preacher. Most of her ancestry was English. One of her paternal great-grandmothers, Catherine Sullivan, born in 1811, was Irish. Prime Minister Thatcher was married to businessperson Denis Thatcher, until his death. The couple had two children.

Prime Minister Thatcher’s maternal grandfather was Daniel Stephenson (the son of Richard Stephenson and Lucy Motley). Daniel was born in Wyberton, Lincolnshire. Richard was the son of Christopher Stephenson and Elizabeth Gaunt. Lucy was the daughter of James Motley and Ann Overton.