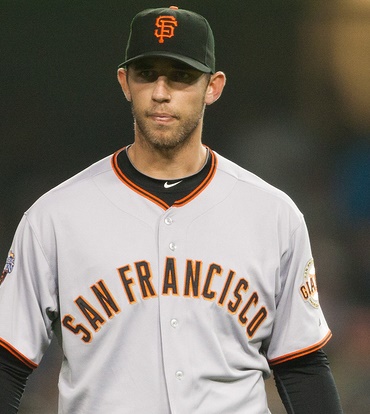 Bumgarner in 2011, photo by Photo Works/Bigstock.com

Madison Bumgarner is an American professional baseball player. He is a starting pitcher, and has played for the San Francisco Giants. He is nicknamed “MadBum.”

Madison grew up in a place in North Carolina nicknamed “Bumtown,” due to the high number of people also with the surname Bumgarner. The surname is of German origin. Madison has several lines tracing back to the same Bumgarner ancestors, from which actor James Garner (born James Scott Bumgarner) was also descended.

Madison is married to Ali Saunders.

Madison’s maternal grandfather is Lewis Howard Abernathy (the son of Moses Daniel Abernathy and Viola Reel). Lewis was born in North Carolina. Moses was the son of Daniel Henry Abernathy and Ellen Melinda Cloninger. Viola was the daughter of Hamilton A. Reel and Levina Clippard.