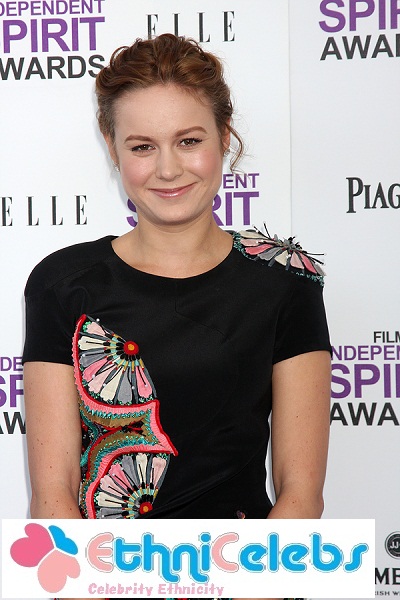 Larson in 2012, image via kathclick/Bigstock.com

Brie Larson is an American actress, singer, director, and filmmaker. She won the Academy Award for Best Actress for Room (2015). She plays Carol Danvers / Captain Marvel in the Marvel Cinematic Universe.

Her father is from a French-Canadian family, from Winnipeg, Manitoba, with distant Métis roots. Her mother has English, Swedish, German, Welsh, and Scottish ancestry. Brie uses the surname of her maternal great-grandmother, Larson, as her stage surname. She also took the name because of an American Girl doll named Kirsten Larson.

Brie’s maternal grandfather was Bobby/Bob Glen Edwards (the son of Glen Thurston Edwards and Lorene/Loren Jewel Corzine). Bobby was born in Oklahoma. Brie’s great-grandfather Glen was the son of George T. Edwards and Dora C. Lorene was the daughter of Lewis Collins Corzine and Josephine Burns.

Brie’s maternal grandmother is Bonnie I. Hunt (the daughter of James Ivan Hunt and Elva Josephine Larson). Bonnie was born in Utah. James was the son of James Carlos Hunt and Elzina May Watson. Elva was the daughter of Carl August Larson, who was Swedish, from Trollhatton, Elfsborg, and of Anna Margaret Stocker, who was German, and was born in Mannheim, Baden; the daughter of Heinrich “Henry” Stocker and Maria Lucia Hardt.

Genealogies of Brie Larson (focusing on her father’s side) – http://www.myheritage.com
https://quebec.huffingtonpost.ca